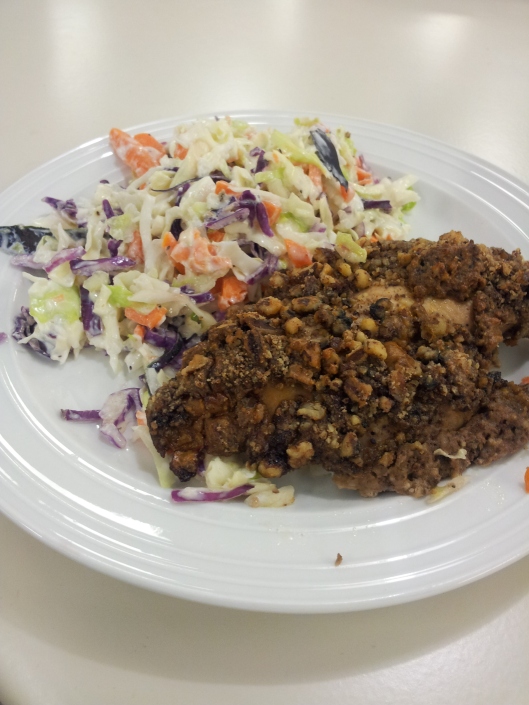 I am so proud of my colleagues.  After an impromptu conversation one afternoon about a colleague’s frustration with his weight gain, I tentatively brought up the diet and lifestyle changes my family and I made almost 2 years ago and how it improved our physical and mental health, not to mention how we achieved (or almost achieved) our weight loss goals.  I say tentatively because evangalizing does turn a lot of people off, and I prefer a more pull-strategy rather than a push-one.

What followed was an intense 4 way conversation (others gathered around), with rapid fire questions questioning me intently about evolutionary theory, the specifics of the diet, what one can actually eat and disbelief that certain kinds of fat can be good for you.

Despite the skepticism, the seed was planted and over the next couple of weeks, the topic would be raised multiple times, with great interest and some disbelief.

Because of what I was saying was such a paradigm-shifting idea, my two colleagues still had resistance.  N would give me his patented raised eyebrows disbelieving look, especially on the topic of fat.  D would repeatedly say “but what can you eat on such a diet?!” (a common intial refrain – my mother had the same reaction).

The skepticism completely disappeared when I decided to show them before and after pictures of my transformation as well as that of my sister (with her permission of course).

After more chats and more proof via success stories from Mark Sisson’s site, both of them jumped on board.

I took further initiative and recommended Sarah Faragoso’ book EveryDay Paleo full of easy recipes, with ingredient lists that are not intimidating.  N bought a copy and has had resounding success applying the recipes, including the meatloaf recipe which I have not yet attempted.

D, who was a sandwich and bagel eating vegetarian, started to eat chicken when she jumped on board paleo.  She is still a little resistant towards red meat but I am sure she’ll come around in good time.

Her dishes are simply mouth watering and I drool looking at them.  She noted she’s saving a lot of money by making her food at home. She’s also commented that she does not miss the sandwiches nor the bagels.

N, due to his self-proclaimed carb addiction, had a harder time initially due to being hit with a strong version of the carb flu.  He reported dizziness, tiredness and headaches for a week.  I had prepared him for it but the flu still took him by surprise.

Thankfully, he gritted his teeth and survived it.

Displayed in the pic above is a dish he personally prepared and brought to work.  The pecan encrusted chicken is from Faragos’s cookbook while the cauliflower side dish is N’s own creation.

This video from TEDX featuring Dr. Terry Wahls made the rounds several months ago and is fascinating to watch.  The good doctor suffered from multiple sclerosis, an auto-immune disorder that attacks the brain and spinal cord.  The form Dr Wahls had was so virulent that it  made her completely wheelchair bound.

In desperation, she re-hauled her diet after stumbling across paleo on the Internet.  She started to fix her body at the cellular level using nutrient dense foods like grass-fed meats, vegetables, seaweed, fruits and organ meats (so nutritious yet so hated by Westerners).

NOT eating certain types of foods likely helped just as much as increasing her intake of nutrient dense food.  She does not eat grains, sugars or dairy.

I really like this passage from her talk.  It deserves to be quoted in full:

I am the canary in the coal mine, here as a warning to all of you. We have a choice. We can continue to eat that delicious, convenient, tasty processed food and watch ourselves and our children grow steadily more depressed, overweight and diabetic.

Or, we can continue to watch health care costs balloon out of control, bankrupting us individually and collectively as a country.

Or, we can eat for our mitochondria, eating vegetables and berries, organic grass fed meat, and seaweed, and have more vitality.

One person I know who was not moved by my entreaties, nor by the examples of people I helped, nor by the articles I sent him about achieving health via nutrient dense foods, nor by the books that influenced me, actually got convinced to jump on board and adopt this way of eating after watching this video.

It is that powerful.

Error: Twitter did not respond. Please wait a few minutes and refresh this page.